For many of us, there is only one summer cocktail: the gin and tonic.  So inspired by the drink, C3 and I mixed up a cookie cocktail in tribute to the libation but with a little Dutch twist. 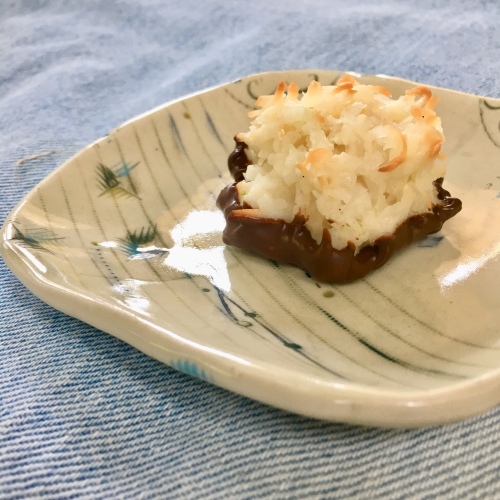 While in Amsterdam this year, we learned about the dutch gin, named jenever which has a strong malty, juniper flavor. It gives this cookie the perfect little nip.  We also purposefully made the recipe dairy free so that all can enjoy.  To make it gluten free, toss the coconut in rice flour versus all purpose.  So sit back and relax and let’s all survive this Texas heat wave with a little something unique and sweet.

In the Crossroads Arts District of Kansas City, Missouri, is located the Green Lady Lounge.  In a town like Kansas City, well-known for its jazz-steeped history, the Green Lady, a reference to female ghosts of lore?, carries that torch with pride. Past the unassuming door lies a low-lit, red adorned room that beckons with a long bar, two live jazz band areas on two levels.  Gold framed mirrors and oil paintings as well as velvet-covered lamp shades embellish the place.  We had to jockey for a table but after some cool negotiations, we found a cozy spot right up front where we could see the band as well as the swarms of people ordering drinks, rubbing shoulders and swaying to the music.

About every two hours, the bands switch out so for me, the chance to hear a variety of jazz sounds was the real treat. The later band was better.  The people watching got better too, the later we stayed, until it came to that point where it didn’t.  You know what I mean? It’s best to show up at the Green Lady after 11 p.m. but you can catch the live music beginning every day — yes, every day, beginning at 3 p.m.  No cover and most of the mixed drinks are $10 or more.

We elected to have our cocktails before showing up at the Green Lady and we found, based on C2’s recent experience now living in the area, that Tom’s Town Distillery Co. is a great place to start your night. Tom’s Town Distilling Co. draws its name and inspiration from the country’s most polarizing and corrupt political boss, Tom Pendergast. Pendergast had roots in the liquor business as a saloon keeper and as the founder of a wholesale liquor company.

Several in our party tried The Angry Goat which uses Tom’s Bourbon, Lillet Rose, strawberry habanero syrup and lime.  The bartender tops the drink with a slice of jalapeno which I would avoid based on the gasps and hiccups from those who imbibed.  Be sure to select some small plates to go along with the strong drinks.  We picked mixed nuts, fried sriracha pickled green beans, tempura style,  and farm to market warm ciabatta served with olives, olive oil and balsamic.  Luckily, we were seated in the back lounge of  the speakeasy. It was a busy Saturday summer night and rocking loud up front near the entrance.  It felt like we were back in the roaring 20’s.

We didn’t plan for a tour but if we did, it looks fun.  Tours last approximately one hour and include an in-depth look at the distillation process of their spirits (gin, vodka and bourbon), a brief overview of Kansas City during Boss Tom’s rule, and a tasting of each of their award-winning spirits. Tours are $10 per person, and are offered Tuesday through Saturday.

So, cheers, to a jazzy Saturday night in the Paris on the Plains.

We landed on a Saturday afternoon, after a three-hour flight from DFW, to smoky skies due to wildfires burning up north and east of the Bay Area.  This haze combined with the often present marine layer added to a certain eariness in the air. July 4th holiday was approaching so the waiting area at the rental car lot looked like a Calistyle refugee encampment full of wayward holiday travelers but after an hour and a half waiting in a slow-moving line, we were on the 101 in our silver RAV4 cruising to our boutique hotel, the Spero, located near Union Square in the heart of San Francisco.

The hotel was named originally, the Californian, back in 1923, but it has recently gone through many name changes including this new tag since I booked our room nearly four months previously on Priceline. The times they are a-changin’.

The building is registered on the National Register of Historical Buildings and blends Spanish Colonial architecture with modern features, lots of light and that cool California vibe. Our room was on the third floor, small but well appointed with a quality mattress and a huge, flat television screen. Great water pressure so our needs are met. Below is a picture of just one of ceiling beams from the massive lobby.

After a long and pleasurable hot shower, and and a bit of unpacking, we headed to the Pacific beach in our rental car to find our dinner destination, in the Cliff House. It was dusk at the beach, unexpectedly chilly for July to us Texans, with a light rain, swirling winds, and birds, lots of large pelicans swooping up and down, feeding on anchovies and shrimp.

Alfred Hitchcock filmed his epic movie, The Birds, just north of San Francisco, near Bodego Bay, so this scene brought goosebumps to the back of my arms and neck while mental flashbacks of the horror film’s schoolhouse sequence added to the effect.  The howling winds completed the episode but we didn’t let a little cold weather hold us back from exploring the old baths located below Sutro’s, our fine dining pick for the night, located in the historic Cliff House. The baths are now in ruin but at their height they could host 10,000 bathers at a time. See the picture below from the Sutro website of the large baths with their climate controlled sections.

At dinner, we gazed out the high windows as the birds feasted in the surf below. We sipped warming drinks and tasted the legendary, local sourdough bread.

The wine and warm bread and salted butter was a meal in itself but we elected to add to the pleasure with a selection of house prepared ravioli with tomato broth and tiny octopus. Enough for Day 1 of our adventure. 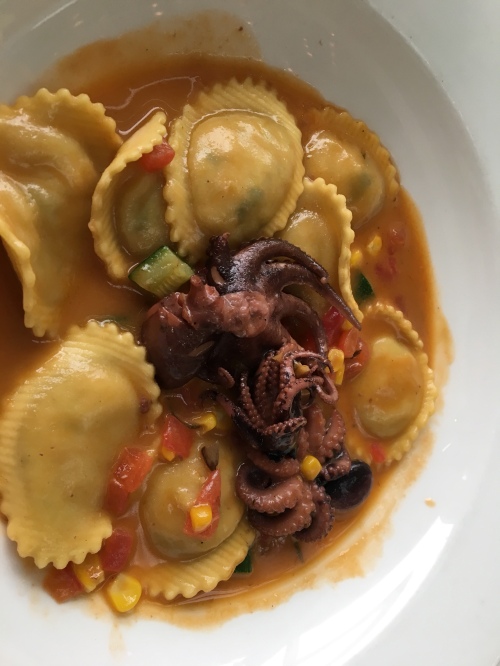 The next day involved lots of walking with nearly nine miles of trekking about the very hilly sidewalks of San Francisco including trailing up and down Lombard Street, out to the Wharf, then back to Union Square and Chinatown.

We chose the Taylor Street Cafe for a late breakfast with my first taste of Millionaire Bacon, a sweet, spicy thick-sliced cut of fried pork belly. The cafe is small, a bit run down but a long line suggests it’s worth the wait. 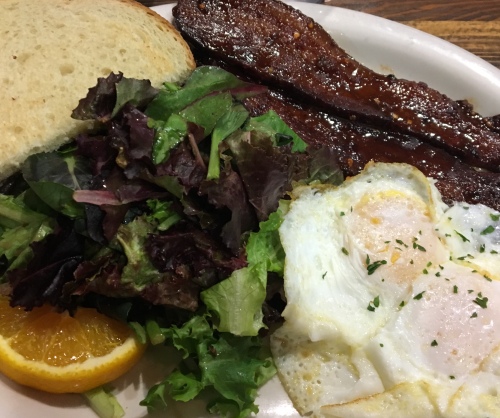 The meal kept my energy up all day as we walked the streets until a late night dinner in Chinatown at Great Eastern Restaurant with small plates of spicy long beans and dim sum. I loved shopping for trinkets along the route including a collection of meditating Buddha’s and Happy Cats. You see so much more of the heart of a city from street level including apricot trees full of fruit, quaint gardens and encounters with locals.

The next morning, we hopped into the RAV4 and headed north over the Golden Gate Bridge for the Muir Woods and beyond.