This week, with our girls traveling to the Grand Canyon on their sister road trip, it brought back fond memories of my first road trip with my husband, RM.

RM and I married in January 1984 in  the middle of one of the coldest winters in Kansas history. It didn’t break out of single digits all day. For that matter, it didn’t get above freezing the days leading up to the wedding. How cold was it?  It was so cold, the dogs were wearing cats.

We left two days later for our honeymoon with plans to move to Burbank, California, for his new job at Lockheed. We innocently skated out over icy roads in a used, brown Saab, topper filled with wedding gifts, car heater on full blast, following the moving van west not knowing what to expect but excited about the change, if for anything, just a variance in the severe winter forecast. RM and I were looking for a new beginning and an adventure.

Our first stop on our journey was in Liberal, Kansas, about as far out west as you can get before leaving the Sunflower State.  We dined at K-Bobs, on overcooked steak, and retired to a hotel that Yelp reviewers would describe as budget aka as cheap as well as adequate for a night’s stay or code for get going before you notice the bedbugs.  I purchased a blue teddy for my trousseau but quickly abandoned it for a sweatshirt and pants to keep the bone-chilling cold and buggy critters at bay that night. RM did his best to warm me up through his parka.

The next day we drove to Taos, New Mexico, for a day of alpine skiing and a delicious dinner.  I dined on  a terrine mold of tri-veggies and goblets of wine, followed by a romantic evening warmed by a traditional kiva in an upscale hotel courtesy of an advance on moving expenses . Life was improving.  We drove on to the Grand Canyon and spent the night in a cabin located so close to the rim that we could walk just a few yards west to soak in the majestic views.  In January, the canyon was filled with pillowy clouds that simulated a river of fog. RM and I were in awe. We dined on duck l’orange that night, a sweet and savory poultry dish new to our uneducated palates.  As you can tell by my memories, that my appreciation of gourmet food started early in my adult life.

Next on adventure road we crossed into Las Vegas.  We stopped at Hoover Dam for a tour and I vividly remember the warmth of the air on my arms and back of my neck when we stepped out of the car in the parking lot.  I quickly slipped into a top and shorts before the tour and felt like I could breathe again for the first time since we had decided to get married four months earlier.  All of the stress of graduating from college, wedding plans, the extreme cold, and the unrealistic expectations we placed on ourselves starting our journey into adulthood and our new life together in California,  were lifted with the warm of the Nevada sun.

RM and I were broke financially by the time we arrived in  Las Vegas (truthfully we were broke before we started but we felt rich) so gambling was not in our cards that night plus back in the early 80’s Vegas was trashy and dirty.   We mistakenly ate at a cheap Vegas “all you can eat” buffet and suffered gastrically until we began to recover slightly just outside Burbank  — our new home away from home and a place to start our wedded life together.  The temperature differential between Kansas and California, over those few travel days, was at least 70 degrees and we were  enamored with our new home, the City of Angels, due to the warmth, the sun, the ocean, and the scent of the fruit trees, loaded with lemons and oranges, as well as the hedges of jade and bougainvillea that thrived in the temperate climate.   Life was getting sweeter by the hour.  It was later we discovered the smog and the traffic.

Ever since our move out of the midwest over thirty years ago, RM and I have lived in moderate climates.  First southern California, then Georgia and now permanently in Texas.  While we often complain of the heat, we are never going back to live in colder climates because we are resident snow birds now livin’ la vida loca in the Lone Star State. RM and I took a risk when we left our hometown, our families, to head west.  But we knew that for us, back when we were so young, that life began when we got to the end of our comfort zone.  We were raised to fly away.  Would we do it all again?  Most definitely.

My family is blessed by generations of fathers who were actively involved in their child’s upbringing.   I remember my own father reading to me nearly every night he was home. I was lucky.  Research shows when fathers used more words with their children during play, children had more advanced language skills a year later. And that is likely also linked with later success in school.

After birth, children whose fathers play with them, read to them, take them on outings, and care for them have fewer behavioral problems during their early school years. And they have a lower risk of delinquency or criminal behavior as adolescents. Again, I was lucky to have a dad, grandfathers and great-grandfathers all willing to invest a little bit of time in me — not a grandson but a granddaughter.

So to all the fathers out there, take time to play with your child, however old, today and every day.  And it will pay off in years and generations to come.  Happy Father’s Day. 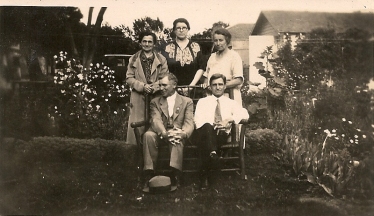 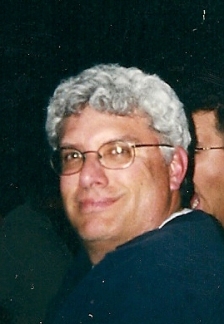 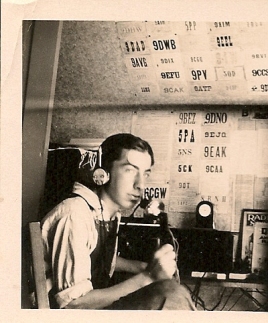 My three grown daughters are going camping next week, not glamping, camping together, all the way from Texas to the Grand Canyon and back.  That is if we can get the truck that is pulling the trailer out of the shop in time.  Nobody, but me, seems concerned that the three most precious humans in the universe to me are loading up their camping gear in a repurposed cargo trailer with plans to cross the American southwest camping in rather isolated areas.  I don’t think they know what they are getting themselves into.  That is why they tell me they want to go.

This cargo trailer is pulled by a 2000 Ford 250 long-bed truck (I grant you the truck has very few miles on it considering its age; nearly as old as our youngest daughter) but it hasn’t been driven anywhere outside the metroplex in nearly two years.  While it has been extremely reliable in the past, recently it has begun to show its age.  Just like a few others I know.

Are we not expecting some kind of toil and trouble with this scenario?  I am NOT looking at my cell phone all next week.  If you want to get in touch with me, send a homing pigeon.

I’m pretty sure the trailer has an expired tag on it as of last night.  RM works miracles so maybe he can get this sad, hipster caravan in route west on Monday after an overhaul of some currently leaking truck parts with the help from our local mechanic, proper tags and licenses acquired from the county, and a couple of dad/daughter lessons on Father’s Day on how to back this long rig into camping spots (not just “pull through”). RM did equip the cargo trailer with all new tires (the old ones had rotted clear out) and installed all new indicator lights on the back.  The small a.c. in it is functioning, all the doors lock from inside, the floor is carpeted, there are built-ins intended for storing items during bumpy transport and there is a nice vent on top to open to take in some fresh air.

The trailer’s original purpose was for RM’s side business of laser etching. It normally sits idle in our driveway used more like an ancillary shop than meant for towing. The girls and he agreed several months ago to clean out the trailer, paint the inside, decorate, and update with home furnishings such as areas to prepare food and sleep in anticipation of a sister road trip to the Grand Canyon this June.  And they are just about ready to take off if these last little “hiccups” can get resolved.

So stocked up with snacks, water, camp oven, first aid kit, maps, bug spray, three debit cards, and each other, they will soon be off on their grand adventure.  Pray for me and them..and RM most of all.

I bought a bean sprouter.  Why?  I think I am channeling my dear departed mother this week.  She grew her own sprouts, made homemade bread, brewed greek yogurt and loved to try new foods.  When she came to visit RM and I in Los Angeles in 1984, soon after we were married, she couldn’t wait to visit Venice Beach and we dined on tofu and eggs, beach side, to her delight.  She was a granola girl for sure and many of her bohemian traits she passed on to me. I can’t help myself.

I love digging in the dirt, making crafts, and conjuring up a chutney or two. I love folk art and quirky hobbies and left of mainstream interests.  So this week, I am into sprouts.

What I have learned in my research on the art of sprouting is that there is a huge variety of seeds that can easily be grown to eat as sprouts including radish, pea, chick pea, mung beans, alfalfa, fenugreek, sunflower, lentil, and broccoli. Each has its own unique flavor and can be eaten on its own or used to add crunch to salads or in sandwiches. I ordered some exotic, organic seed mixes purchased online from Sprout Lady Rita.

Sprouts are veritable stars of the vegetable world. Their numerous and widely touted health benefits include high levels of dietary fiber, B complex vitamins and protein. Sprouts also contain digestive enzymes and some of the highest known levels of certain antioxidants.  Harmful compounds, such as tannins, that are present in seeds are eliminated during the soaking step, which occurs prior to sprouting. 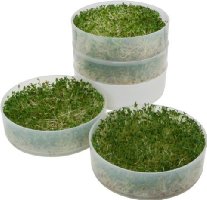 When growing sprouts at home, look for seeds that have been specially prepared for sprouting. They will be clearly labeled for this purpose and can be found in many health food stores or online. These have been cleaned and are less likely to contain pathogenic bacteria.  I bought the Deluxe Kitchen Crop by Victorio.  It comes with a reservoir lid and base and 4 seed trays as well as easy to read instructions to follow or you can watch this silly youtube.